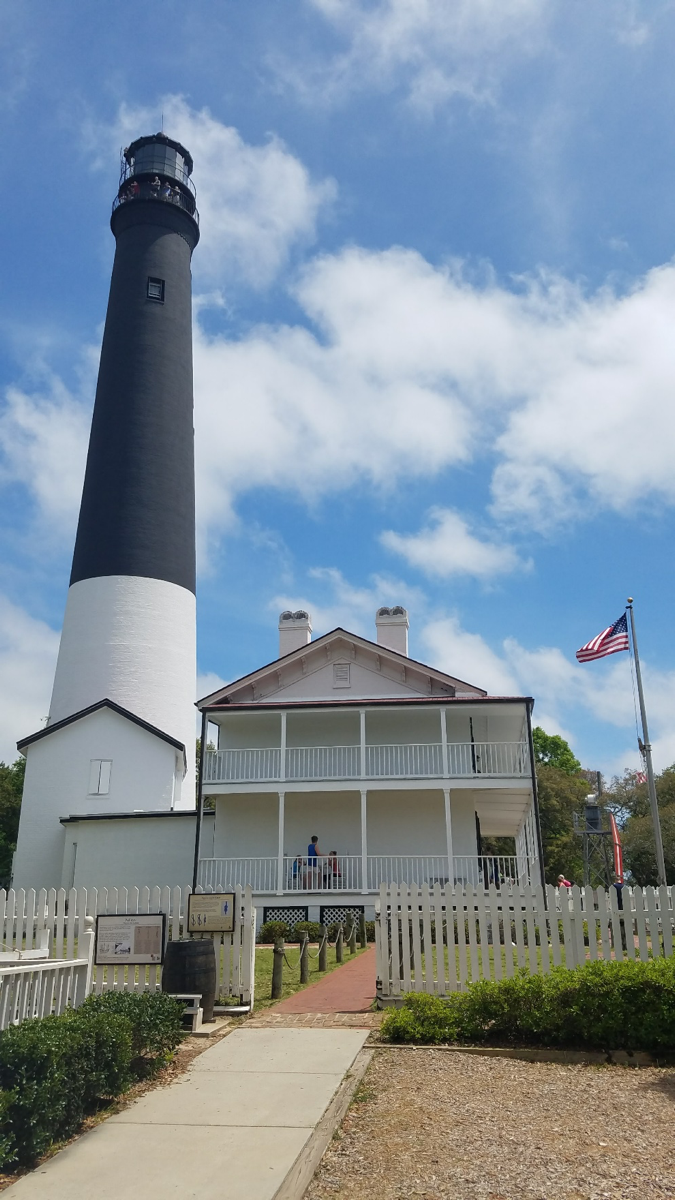 The Pensacola Lighthouse, lit for the first time on New Year’s Day 1859, sits near the entrance of Pensacola Bay and stands at 159 feet tall. This is the second lighthouse built in Escambia County. The first one was too short and too dim. The current lighthouse has a first-order Fresnel lens installed that flashes a unique pattern demarcating Pensacola. The keeper’s house, built in 1869, sits at the base of the tower.

During the Civil War, the lighthouse hosted Confederate troops who battled against the federal forces across the bay. The warring armies fought for control over the light to either guide reinforcements into the area or keep them out. In November 1861, Union cannonballs slammed into the Confederate encampment near the lighthouse. One cannonball passed through the lighthouse, resulting in a large hole in the brick. After the war, the lighthouse board authorized $20,000 to repair the structure and in 1869 it resumed its duty warning mariners of the dangers at Pensacola Bay. Since its construction, the Coast Guard repaired the structure multiple times to ensure its integrity. In 2016, an engineering firm installed custom carbon fiber ‘biscuits’ in cracks along the tower to reinforce the crumbling mortar. As useful as the lighthouse is, it is better when paired with other navigation aids to create a total system of guides. In 1886, the Light-House Board deemed it necessary to install additional aids to navigation in Pensacola. These came in the form of ranges and lighted beacons. The recommendation included an appeal to Congress for $17,250 to address this need.  Nautical charts after 1900 show a wide array of navigation aids that line up with the lighthouse, creating a landscape necessary for entering the bay. Pensacola Lighthouse is among the most obvious and most important sites in the navigation landscape, extending its influence miles beyond the bay.

Currently, The Pensacola Lighthouse is on Pensacola Naval Air Station and accessible to the public. The United States Coast Guard, though no longer manning the light, still maintains ownership of the site but the non-profit Pensacola Lighthouse Association leases the tower and keeper’s house. The museum is open 7 days a week and regularly hosts various events, tours, and educational programs.

“Artillery Damage after the Civil War’. Pensacola Lighthouse and Museum.